As filed with the Securities and Exchange Commission on January 15, 2016

Amendment No. 3 to
FORM S-1
REGISTRATION STATEMENT
UNDER
THE SECURITIES ACT OF 1933

Approximate date of commencement of proposed sale to the public: As soon as practicable after the effective date of this Registration Statement.

If any of the securities being registered on this Form are to be offered on a delayed or continuous basis pursuant to Rule 415 under the Securities Act of 1933, check the following box.

We believe our PLxGuard TM delivery system has the potential to improve many already-approved drugs and drugs in development because it may:

The PLxGuard TM delivery system has clinically proven these benefits with our novel formulations using aspirin and ibuprofen and has preclinical evidence supporting the potential for a GI-safer oral diclofenac and intravenous indomethacin products.

Other existing or new drugs in development that may benefit from the PLxGuard TM delivery system will be evaluated either by us or through collaboration agreements with other companies.

Our lead product, PL2200 Aspirin 325 mg, is approved by the FDA for OTC distribution and is the first-ever FDA-approved liquid-fill aspirin capsule.

Serum Thromboxane B2 is a clinically accepted marker for antiplatelet efficacy (sometimes referred to as “aspirin response”).

PL2200 Aspirin 325 mg has demonstrated a statistically significant 65% reduction in the risk of acute ulcers compared with immediate release aspirin in healthy subjects with an age associated risk for cardiovascular disease.

This acute GI safety benefit may also be important for acute coronary syndrome (ACS) patients. Moreover, we believe ACS patients who are also diabetics and suffer from gastroparesis, or a lack of digestive stomach motility, could also benefit from PL2200 Aspirin due to its more predictable absorption when compared to enteric coated aspirin.

The acute GI safety benefit may also be used to differentiate PL2200 Aspirin 325 mg from products intended for use in conditions associated with pain and inflammation, including other aspirin and NSAID products.

This product utilizes exactly the same formulation as the 325 mg product (except delivered in a capsule one quarter the size) and will be the subject of an sNDA, which we expect to file with the FDA early in the second half of 2016. We will rely on the clinical results for PL2200 Aspirin 325 mg for the PL2200 81 mg sNDA and do not anticipate any additional clinical trials will be required, effectively positioning this product as an end of Phase 3 status.

(For a more detailed explanation of clinical trial phases, see the discussion below under “Business — Government regulation —  Clinical trials.”)

We believe our technology may be used with other selected NSAIDs, such as ibuprofen. For the U.S. OTC market, we have used the PLxGuard TM delivery system to create a lipid-based formulation of ibuprofen, PL1200 Ibuprofen 200 mg and a 400 mg product for prescription doses of ibuprofen.

We have OTC and prescription (Rx) Investigational New Drug applications (IND) active with the FDA and have demonstrated bioequivalence with the OTC 200 mg dose ibuprofen to support a 505(b)(2) NDA in fasted-state clinical trials at three different doses, 200 mg, 400 mg and

Using the PL1200 formulation at prescription doses, we demonstrated better GI safety in osteoarthritic patients with equivalent analgesic and anti-inflammatory efficacy, when compared with prescription ibuprofen in a six-week endoscopy pilot clinical trial.

The following table summarizes information regarding our product candidates and development program: 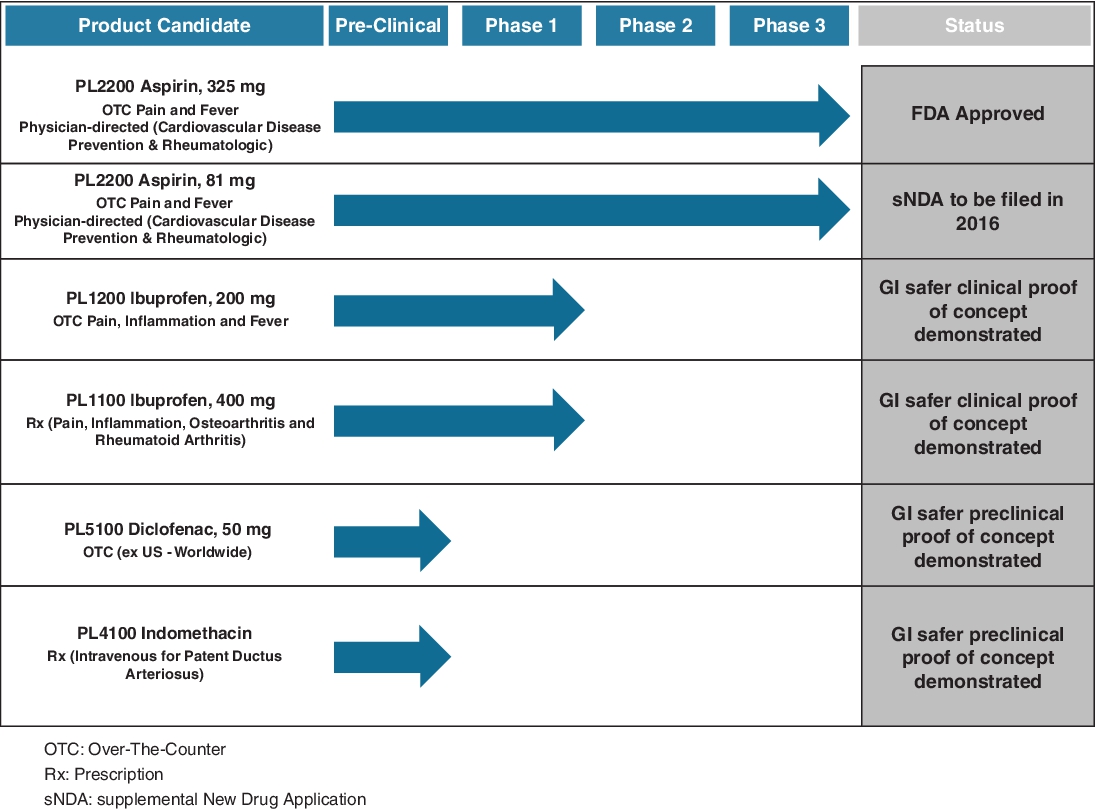 Aspirin, also known as acetylsalicylic acid (ASA), is a foundational medicine for the treatment and prevention of cardiovascular disease (CVD) — a collective term for chest pain, coronary artery disease, heart attack, heart failure, high blood pressure and stroke — which is the leading cause of death in the United States.

Aspirin is widely used to treat patients exhibiting signs and symptoms of heart attack or stroke (collectively referred to as ACS), and is commonly prescribed or recommended by physicians, in addition to other drugs such as cholesterol or blood pressure medications, as the standard of care for treating ACS and preventing recurrent ACS for the duration of a patient’s life.

The 325 mg dose is generally prescribed:

Eventually, most patients move to the 81 mg dose for secondary prevention applications and for high-risk primary prevention, as they are typically directed to take aspirin every day for the rest of their life.

The 81 mg aspirin dose is the most prevalent, representing approximately 70% to 80% of aspirin sales in the United States, followed by the 325 mg dose and then several other dose forms including powdered and effervescent aspirin products.

In the United States, the primary use for aspirin is for the prevention and treatment of cardiovascular disease as evidenced by the predominance of the 81 mg dose.

Aspirin is also used for pain relief and fever reduction. The most widely used dose for pain is 325 mg. A GI-safer PL2200 Aspirin 325 mg may be able to capture market share from other aspirin and NSAID products in the large pain and inflammation market.

Annual global aspirin sales in 2013 were estimated to be $1.6 billion (Euromonitor), including branded products such as Bayer®, Ecotrin® and St.

Joseph®, together with numerous private label or store brands.

The integrated chemical and pharma company was looking to raise Rs 25.80 crore.

Because of the known GI toxicity issues associated with immediate release (or “regular”) aspirin, enteric coated aspirin has evolved to become the leading aspirin dose form, representing over 90% of U.S. aspirin sales in 2013. This success is largely based on early clinical studies suggesting that enteric coated aspirin showed a reduction in superficial gastric lesions as compared with regular aspirin.

However, when measured using contemporary clinical procedures, enteric coated aspirin has not continued to demonstrate such reductions. These deficiencies create a significant opportunity for the demonstrated efficacy of PL2200 Aspirin.

The global OTC pain market for NSAIDs was over $12 billion in annual sales in 2013 (Evaluate Pharma).

Ibuprofen in the United States alone represents $1.6 billion. This class of drugs is one of the most widely used drugs worldwide. Increasing concerns over liver toxicity associated with acetaminophen products coupled with known ibuprofen analgesic superiority over acetaminophen, indicate there is a substantial global opportunity for a GI safer ibuprofen product. While we do not believe our technology will work with the entire NSAIDs class, it is possible that our technology may be successfully applied to other NSAIDs beyond aspirin and ibuprofen.

For example, we have preclinical data suggesting that diclofenac — a leading NSAID for pain and inflammation outside the United States — is a viable product candidate.