Netflix Makes a Deal With Disney

A reader asked me about a Motley Fool promo that was running late last week, and it sounds like a pretty spicy one… here’s the part that got my attention:

“Did the “Next Netflix” just raise $2.25 billion in a massive IPO last Thursday?

“I’ll tell you what, I wasn’t missing out on its IPO.

As the minutes wound down until its first trade, my finger hovered over my broker’s “buy” button.

“And at the first moment I could, I clicked buy. Then right before the end of the trading day, I took another plunge – making a second buy of the company’s freshly IPO’d shares.”

I figured that if this was David Gardner making such a claim, his acolytes would be all over it and the stock might be up 50% on the force of his enthusiasm… but no, this was from Eric Bleeker, one of the Motley Fool analysts who work on Gardners’ Rule Breakers newsletter, so it’s not even clear whether or not this is a formal recommendation of that growth-focused newsletter.

But still, we do like to uncover a mystery… so what’s the stock?

Here are our pertinent clues…

“The company unveiled a Netflix-like premium video service that exploded from less than 5 million subscribers three years ago to more than 60 million today. 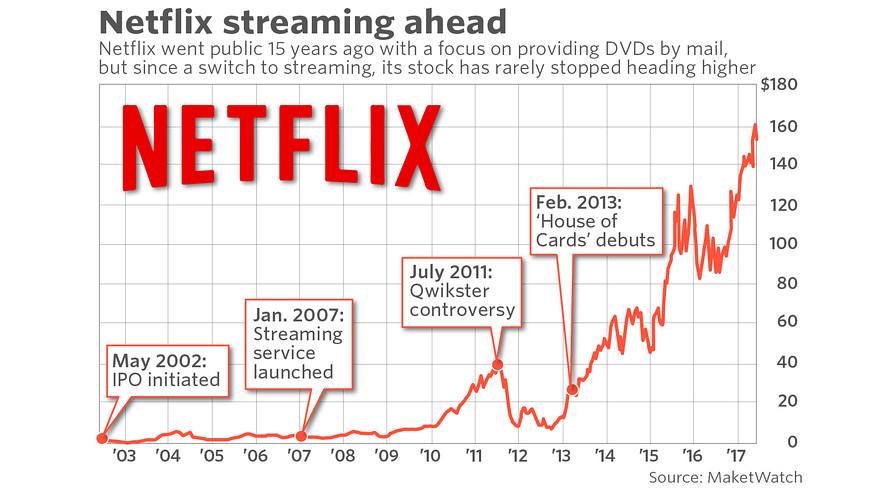 “Sales have surged by more than 3X in just the past two years alone.

“Best of all – its market is booming. Right now, the company commands less than 1% a market that’s predicted to surge to $440 billion in the coming years.”

The ad is for the Rule Breakers newsletter ($49/yr), though the pitch is focused on their special “2018 IPO Boom Report,” and Bleeker indicates that this report will talk up this secret stock as well as two actual David Gardner recommendations from the recent IPO boom… but other than that, those are the clues.

So what’s our answer?

Well, thankfully once you narrow it down by IPO amount and day, it becomes fairly easy… so we didn’t even have to move the snowblower to haul the Thinkolator out of the garage (yes, it’s snowing here in the wilds of Western MA this morning… and no, after April Fool’s Day, snow is no longer pretty or romantic).

We can tell you quite quickly that this is the Chinese “Netflix Wannabe” that I wrote about to the Irregulars late last week: iQiyi (IQ).

iQiyi is a spinoff of Chinese search engine giant (and all-around Alphabet copycat) Baidu (BIDU), Baidu still retains a controlling stake of 70% or so but has spun part of the company out to new investors… probably largely because, not unlike Netflix, it’s a business that devours cash and needs still more capital to create more video content, and that makes Baidu’s balance sheet look less impressive.

I guess you can say that they hold “less than 1 percent” of the market if you’re talking about video and television in general and if you believe that the near-term market is something like $440 billion, which is not much more than a guesstimate, but they had $2.5 billion in revenue last year and are fairly large.

And yes, that need for cash is exacerbated by the fact that iQiyi has lots of small competitors and two really huge ones, all of whom are eying that large and fast-growing Chinese streaming video market (both paid and free video, though IQ and the other competitors mostly operate on a “freemium” model, offering a lot for free but holding back “premium” content for paid subscribers).

All of them are trying to attract subscribers with unique content, including both licensed content from overseas and homemade shows of increasing quality… again, clearly inspired by Netflix.

They arguably have a lead position, with a lot of hit shows (and a collaboration with Netflix)… but even if they have a lead, it’s certainly not insurmountable.

The race among the top three is tight — and the other two, Youku Tudou (owned by Alibaba for years) and Tencent Video, are able competitors who are far larger and not at all short on cash or connections.

Perhaps IQ will do well with a separate and focused management team, as sometimes happens with spinoffs, but that, of course, is far from guaranteed — and they will likely still rely on their parent Baidu to generate traffic and help with new customer acquisition.

I opted to take a small, speculative position (both options and equity) last week, mostly because I think there’s potential that the IPO was overlooked because of the recent weakness in big China tech stocks (and, really, tech stocks in general), and because the potential for growth is very high… though the potential for failure is also quite high, particularly given the high level of competition.

Here’s a small excerpt of what I wrote to the Irregulars about this speculation last week:

That’s a much cheaper valuation than the Chinese internet giants trade at, but that’s because IQ is nowhere near being profitable and Tencent, Baidu, Alibaba and the rest all have strong and growing profits in their core businesses.

“I like that the IPO came at an awful time in the markets, and didn’t generate a lot of attention despite the relatively large size (IQ is a $10+ billion company now, and raised more than $2 billion), and I think there’s a decent chance that any return to ‘normalcy’ in Chinese stocks could give IQ a chance to surge above $20 in fairly short order (like, six months or so)… and, more importantly, that their focus now that they have a life separate from Baidu will give them a chance to stand out from the crowded trio that leads the growing Chinese premium video market. They claim to have a strong competitive position with the most popular content — 42 of the top 50 titles, 6 of the top 10 drama series, and 5 of the top ten variety shows — but, of course, there’s a downside to being “hit driven” if you hit a dry spell in your hit-making machinery.

“So this is a ‘story’ speculation, but it comes with established revenue growth… it’s just that competition and the fairly young status of this industry in China means we won’t know for a while whether or not one of the three leaders really ‘wins,’ and there’s certainly the possibility that three huge competitors in this space means profitability will be elusive for a long time as they all fight for market share….

“If you’re interested in researching this one yourself, someone posted the slides from their pre-IPO “road show” presentation here, and you can see all of the detailed info in their prospectus (F-1) and other SEC filings here.

And on the “cautious” side here’s a piece from Bloomberg about the tough competition and the weak IPO, and a contrary opinion from a Motley Fool writer, for a bit of perspective (the Fool is far from a monolith, of course, and a different author also has a bullish note here).”

And I’m clearly “talking my book” here, since I own this stock, so I will extend the trading moratorium — I won’t trade in iQiyi shares (or any of the other stocks mentioned above) for at least a week.

This is not a slam-dunk of a stock (those are few and far between, of course, if they exist at all), but sometimes something as simple as huge top-line growth is enough to get me to make a small speculation… this is a “busted IPO” in many ways, with a share price that has never held the $18 at which they sold stock to the public just under two weeks ago, so it’s a bit contrarian, but that definitely does NOT make it a value stock.

And, of course, it’s your money — so it’s not what I think that counts, it’s what you think… interested in trying to ride the growth of Netflix-like services in China?

Wary of the valuation or the competition?

Disclosure: I own shares and/or call options on Alibaba, Amazon, and iQiyi, as well as shares of major Tencent investor Naspers. I will not trade in any of those stocks for a week, per Stock Gumshoe’s (extended for this article) trading rules.

plus You and I can each earn a free share of stock right now if you open an account!

Irregulars Quick TakePaid members get a quick summary of the stocks teased and our thoughts here. Join as a Stock Gumshoe Irregular today (already a member?