Investment manager Magellan Financial Group released the product disclosure statement for the much-hyped Magellan Global Trust last week, offering a number of innovative features designed to appeal to investors. But one feature that might not win favour is a decision to cap “cash” distributions and force unitholders to reinvest “excess” distributions.

Magellan says it is targeting a cash distribution yield of 4 per cent a year, paid semi-annually.

Distributions will typically be unfranked.

Under normal circumstances, trusts pay out all income and realised capital gains to unitholders.

However, the PDS says that where net income or net capital gains earned in a particular year exceed the distribution target, Magellan intends that the portion of any distribution in excess of the target will be required to be reinvested as additional units through the distribution reinvestment plan.

Investors usually like to make their own call about where they reinvest their returns and some might see this condition as a deal-breaker.

Mandatory reinvestment could be seen as a cash grab, putting growth in funds under management and fees ahead of investor benefit.

A spokesman for Magellan says the aim of the distribution strategy is two-fold: to give investors a consistent and predictable yield through a “smoothing” mechanism; and to use the DRP to support the unit price and thus avoid the problem of having the trust trade at a discount to its net asset value.

Another possible concern for investors is that when “excess” distributions are reinvested they will not qualify for the DRP discount that Magellan is offering.

According to the PDS, Magellan is offering a distribution reinvestment plan with a 5 per cent discount.

The spokesman says investors can sell units if they want more of the distribution.

However, this will involve brokerage cost and add administrative complexity.

Magellan is targeting a minimum of $250 million, although some media reports have said Magellan is aiming to raise around $1 billion.

Commencement of trading on the ASX is scheduled for October 18.

The investment strategy is to hold “focused portfolio of the world’s best companies”, investing at a discount to Magellan’s assessment of each company’s intrinsic value.

The portfolio will hold 15 to 35 investments.

The portfolio is managed by Hamish Douglass, Magellan’s co-founder, chief executive and chief investment officer, and Stefan Marcionetti, who joined Magellan in 2013.

All costs of the offer will be paid by the Magellan Group.

This means that investors will be subscribing for units in the trust at a price equal to the net asset backing. It also means that the initial investable cash of the fund will be the amount raised under the offer.

Existing investors in Magellan’s retail funds have been invited to invest via a proprietary offer, which includes eligibility to receive loyalty units equal to 6.25 per cent of the number of units allotted to the applicant.

Management and administration fees are 1.35 per cent and there is a performance fee, which is 10 per cent of the excess return over the higher of the MSCI World Net Total Return Index or the yield of 10-year Australian government bonds.

Magellan was established in 2006 and launched its global equities strategy in 2007. 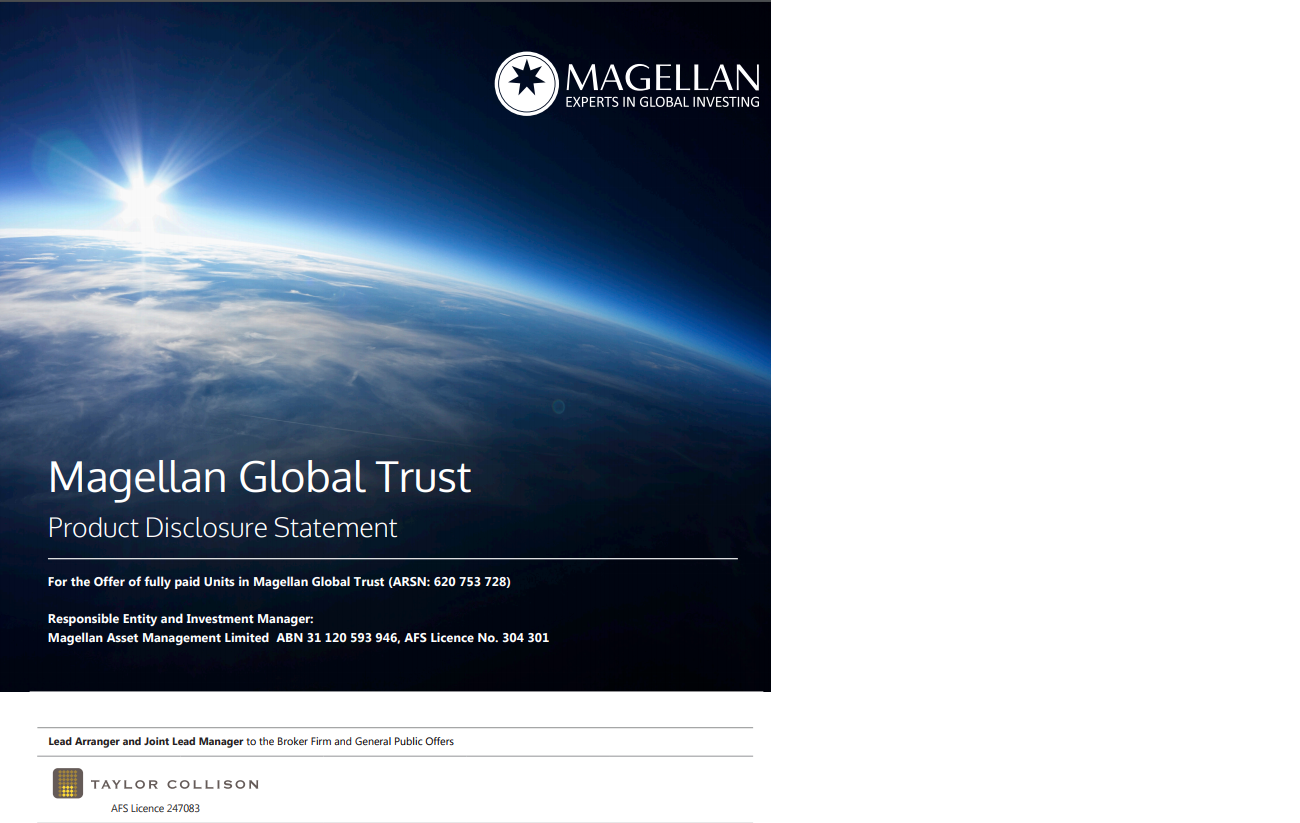 It manages more than $41 billion.

The group’s flagship $8.9 billion Magellan Global Fund has produced an average return of 10.7 per cent a year since it was launched in 2007, compared with a return of 4.8 per cent a year for the MSCI index. Over the past five years the fund has returned 17.9 per cent a year, matching the index.

Over the 12 months to the end of July the fund has returned 9.8 per cent, compared with he index return of 10.5 per cent.

The new trust will have a different investment mandate, allowing for a higher cash allocation, currency management, borrowing up to 20 per cent, and targeted distribution.

Returns will not be the same as the Magellan Global Fund but the investment managers will be looking for stocks in the same investment universe.