Political uncertainty across the globe helped dampen IPO activity in 2019 with listings down by 20% against an eight per cent fall in capital raised, according to research by Baker McKenzie.

Baker McKenzie Focus: State of the Global Market for IPOs

US-China trade tension, Brexit, and political unrest in Hong Kong and across Latin America are among the factors leading to the decline in listings to 1,420 and total value to $206.1bn, according to the Baker McKenzie Cross-Border IPO Index 2019.

The report also blames the declines on the poor performance of several ‘high-profile, pre-profit’ unicorn IPOs this year and the subsequent postponements and cancellations of anticipated offerings.

It says more than 80 companies have delayed or cancelled plans to list.

Uber and Lyft are among the high-profile tech companies whose value has fallen after listing in 2019, while WeWork hit the headlines in September when it cancelled its planned IPO.

The report observes: ‘While VC-backed capital raising hit new and dizzying heights, post-IPO performances brought investors' enthusiasm back to earth with a bump, as stock prices began to depreciate on a number of high profile, yet-to-profit tech listings, against an enlightened view of the company’s financials, path to profitability and cash burn.

Concerns around inflated valuations of these types of listings caused investors to question whether private valuations gave an accurate indication of post-IPO performance.'

The report notes that domestic IPO value increased by 4% despite a 20% decline in volume to 1,048 due to strong performance in the US and China and several high value deals.

In Hong Kong, listings were down by more than half from 93 to 41 while Italy led the way in the Europe, Middle East and Africa region with 30 listings, followed by the UK, with 26.

The firm predicts a subdued 2020 due to continued political uncertainty fuelled by the upcoming US presidential elections.

Koen Vanhaerents, Baker McKenzie’s global chair of capital markets, said: "It has been an interesting year for the global capital markets as unexpected issues, both in the market and politically, have significantly impacted upon activity and investor sentiment.

“While we entered 2019 on an optimistic note, underperformance of a number of larger listings coupled with heightened political issues saw a more muted end to the year than anticipated.” 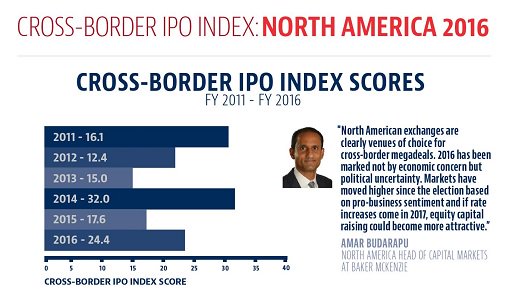