Dangote Cement’s market valuation is up 13 percent this year.

Dangote Cement Plc, owned by Africa’s richest man, has revived plans for a share sale in London that could raise about $1 billion, according to people familiar with the matter.

The Nigerian company, controlled by Aliko Dangote, has approached investment bankers to discuss a potential U.K.

listing, said the people, who asked not to be named as the talks aren’t public. Once banks have been appointed, it will probably take at least five months to complete the process, one of the people said. 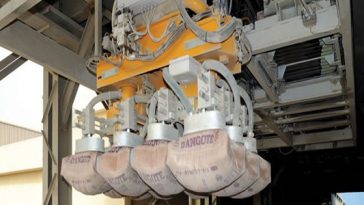 The cement maker is also considering issuing a debut Eurobond, according to two different people familiar with the matter.

Discussions are ongoing and a listing of Africa’s biggest cement maker may not go ahead, the people said.

“We have not, to the best of my knowledge, taken such a decision,” Anthony Chiejina, Dangote Cement’s spokesman in Lagos, said in an emailed response to questions, without commenting on the banker talks.